Imagine With Our Sponsorship Coordinator!

We asked our sponsorship coordinator, Pam Capone, to share some thoughts about IMA – specifically about her role and how she got started, what fuels her passion for IMA, as well as what she does on her annual trip to visit IMA, which is currently underway. From her bunk at the missionary house, Pam writes: 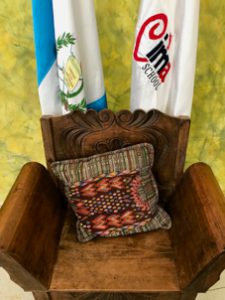 One of my objectives when I come to Guatemala is to take student photos, and this is the chair in which the girls sit for their formal picture. As I was taking photos today, it occurred to me that the first three letters in the word imagine, is IMA. That’s pretty serendipitous and quite perfect. IMA is all about imagining. Our IMA girls stand on the shoulders of giants who imagined. These “giants,” these strong women had a God-inspired hopeful-sight of what IMA could be. Tina Randy, Shari Ciotti, and Mary Ann Heaps laid a foundation for so many to stand. And later Haydee Abel, a native Guatemalan who had the very heartbeat of Guatemala within her. Women empowering women—true visionaries in founding and primary leadership roles at IMA. Haydee has since passed and the founders have retired, but other women with strong shoulders have stepped in—Haydee’s sisters, Cesiah Barerra and Bessie Del Cid and our current president Jamie Randy. Today these women bear the day-in, day-out weight, supporting our young girls and women so that they too might be lifted high, to see and believe what is possible for them.

I was introduced to IMA by Tina Randy in the early days, became an individual student sponsor (and still am) and was an occasional volunteer for certain IMA projects and events. Then in 2008, I accepted the tag-team – aka one-two-punch, aka can’t-say-no invitation by Tina and Haydee to join the IMA staff “full time.” A couple weeks later, I came to Guatemala for my first trip and I met the student, Monica, I had sponsored for years. Haydee, who had been valiantly battling cancer, was also on that trip. Haydee was very sick and knew she was coming to the end of her stay on this earth—and would be going to her true homeland at anytime.

Haydee ate, drank, and slept IMA. If I had put my ear to her chest, I might’ve heard the thump-thump of her heartbeat make an “eee-muh, ee-muh” sound. She knew what kind of life Guatemala held for young girls and she was compelled to make a difference, and indeed, she has!
On that trip one afternoon, she asked me to take her outside and give her a ride in her wheelchair. As I carefully navigated the bumps in the pavement, I pushed her frail, cancer-ravaged body that carried her sturdy soul. Haydee was quiet and asked me to park her in a patch of sunlight. Haydee pointed out the garden she’d planted; told me names of the plants. Haydee talked about IMA and how the work needed to go on after she was gone. I told her I would do my part. Haydee passed on a few days later. That was twelve years ago.

Today I was visited by Mabelle, an IMA alumna. Mabelle was at IMA when I first started coming to take student photos, and she sat
in this chair like so many others, smiling for my camera. After she graduated, she worked in the office and helped me with my student photos of her younger “sisters.” Now Mabelle is in her final year at university and beginning her internship to become a high school teacher.
Mabelle is only one of many, many IMA success stories—teeny girls who once sat in this very chair, allowing me to take a student photo and birthday greeting video for her sponsor in the states—and then when on to take imagination into reality.

Now that I have wrapped up taking my student photos on this trip, I look at this empty chair and I imagine the new little girl who will sit in it next year when I come. (Shameless sponsorship coordinator plug: I need more sponsors so that they can sit here. 🙂

And when I leave IMA in a few days, I will pass by that sunlit spot where I parked Haydee’s wheelchair and imagine that moment I shared with my friend—a giant who held up so many little girls…and somehow she still does.